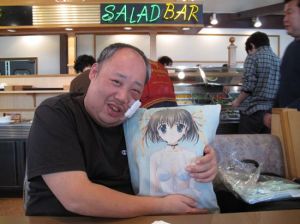 Another possible culture-bound syndrome from my favorite place! 2-D Love refers to people who obsessively fall in love with objects imbued with anime cartoon images. In the case of this article the love object is a pillow with an anime women character printed on it. My feeling is that this may be a specialized case of Taijin Kyofusho, a social anxiety disorder that often results in avoidance of others. While it is my belief that this syndrome is not limited to Japan but is found anywhere in the world where slacker adults move into their parent’s basement, the Japanese version is colored in unique ways. One of these ways is an obession with anime – the so-called Otaku culture. If this obession leads to interaction with real human beings then it is likely healthy, but if it becomes a defensive excuse to become isolated from other people then it may be a form of Taijin Kyofusho.

Both Taijin Kyofusho and 2-D Love may be related to another culture-bound syndrom called Hikikomori. In this disorder teenage boys refuse to engage in any way with the outside world, essentially becoming hermits in their parents home. These boys may stay inside for years at a time. The onset of Hikikimori behavior is typically related to a negative incident related to school – bullying, bad grades, or a failed attempt at romance.

Dr. Kevin Volkan is a psychologist, writer, and educator with over twenty years of clinical, corporate, and academic experience. He is Professor of Psychology at California State University Channel Islands (CSUCI) and is on the graduate medical Faculty in the Community Memorial Health System. Dr. Volkan was one of the founding faculty at CSUCI which is the 23rd campus in California State University system where he teaches a course on atypical psychopathologies titled Bizarre Behaviors and Culture-Bound Syndromes. This course explores the outer range of extreme human behavior including paraphilias and was the inspiration for this blog. Consonant with his interest in deviant psychopathologies he also teaches clinical psychology and a course on the psychology of Nazi Germany and the Holocaust. Dr. Volkan has been a Silberman Seminar Fellow at The U.S. Holocaust Memorial Museum in Washington DC in 2010 and 2014. Before coming to CSUCI, Dr. Volkan was a faculty member at Harvard Medical School where he researched ways to measure medical student and physician performance, and the psychological origins of medical error. While at Harvard, Dr. Volkan also taught for the prestigious Harvard-Macy Institute, a joint program run by the Harvard Business, Education, and Medical schools. In this program he taught medical students and physicians from Harvard as well as from all over the world. Dr. Volkan’s background in psychology is varied and he maintains an active interest in several psychological approaches to understanding human nature – including socio-biological, psychoanalytic, psychometric, and cognitive-behavioral. He has had a long-standing interest in the psychology of compulsive drug use (which has similarities to the psychology of paraphilias), and has published a book on the subject. Dr. Volkan worked as a clinical psychologist for many years. This experience included serving as staff psychologist and Vice Chair of psychology at Agnews State Hospital in San Jose. During his tenure at Agnews, Dr. Volkan worked with patients who demonstrated many severe behavioral problems, including profoundly autistic, psychotic, self-injurious, and developmentally disabled individuals. Dr. Volkan was awarded the Sustained Superior Accomplishment Award from the State of California for his clinical work. In addition to his hospital work, Dr. Volkan also maintained a private practice in psychology in the San Francisco Bay Area. He served as a psychologist for the California Victim Witness program, seeing patients who were victims of crime and/or abuse. Dr. Volkan’s clients included a diverse population of people representing a wide variety of socioeconomic strata and psychological distress. Dr. Volkan received a BA in Biology from the University of California, an MA in Psychology from Sonoma State University, an EdD in Educational Psychology from Northern Illinois University, a PhD in Clinical Psychology from The Center for Psychological Studies, and a MPH in Public Health from Harvard University. In his spare time he practices martial arts and plays guitar in a rock band.