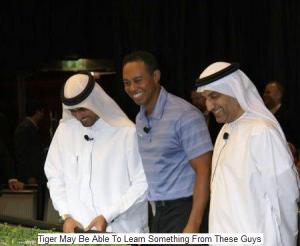 Like most of you we have been inundated with news of Tiger Woods’ multiple infidelities over the past week or so. Most commentators have been expressing various forms and levels of shock and outrage over his sexual escapades as if his situation was somehow unique, strange, and bizarre. It is of course none of these things and, in fact, for a person of Tiger Woods’ vast resources, quite common.

Plato wrote in the Republic of the Ring of Gyges, which renders its wearer invisible and hence capable of any kind of behavior without consequence. Anyone with the Ring will be succumb to temptation to use it and act immorally. In Plato’s view, morality is a social construction in that we adhere to its conventions only because we fear our immorality could be discovered. If we cannot be caught, this fear is removed and we will behave immorally. By the way, it is interesting to note that Plato’s Ring of Gyges likely provided J.R.R. Tolkien with inspiration for Lord of The Rings.

For men like Tiger Woods, their vast wealth and fame must excerpt a temptation similar to the Ring. When your net worth is around 1 billion dollars it is inevitable that you might feel you can get away with anything. How many of us men (and women too) if given a billion dollars, would be able to withstand the temptation?

Of course, wealth and fame are only an approximation of the power of the Ring, and as we know Tiger has been caught cheating. So what, in biological terms did Tiger do? He committed the act of reproduction (i.e. sex) with multiple females (at least one of whom wanted to have his actual baby) as alpha males have done throughout human history and throughout time in the animal kingdom. Tiger is no different than past Turkish Sultans, Chinese Emperors, or European medieval lords with their droit de seigneur. He also behaved no differently than alpha male gorillas and chimpanzees, or even the elephant seals which are currently congregating at Ano Nuevo Island on the California coast, north of Santa Cruz.

A recent study by Knox, Vail-Smith, and Zusman (2008) found that about 1 in 5 college-aged men of typical social status report cheating on their partners. Furthermore, these men did not always disclose their cheating. Sexual infidelity is not that uncommon, so why such a big negative reaction to Tiger? It may be that the alpha male is always a target for subordinate males who would like (at least unconsciously) to usurp his position. The Tiger Woods of the world bring out the Oedipal Complex in us men – if we can’t get rid of him, we want to be him. The overblown response to Tiger’s cheating (as with Bill Clinton or Elliot Spitzer) may be an example of our inability to identify with Tiger anymore and a reversion back to our unresolved Oedipal crises. If we can’t be Tiger at least we can bring him down a notch. (We don’t have space to go into Tiger’s own Oedipal issues including his identification with an adulterous father. Supposedly he was in bed at his home with one of his mistresses when he received news of his father’s death.)

It is likely that the number of cheaters among the rarefied social ranks is higher and perhaps like our primate ancestors we worry in some deep, hidden parts of our brain that these alpha cheaters are capable of ravishing our women as well. If Tiger has put on the Ring of Gyges what is to prevent him from seducing our wives or girlfriends?

The solution to this seems in some way obvious to me, and is something practiced in many cultures: Polygamy. In other words why not adopt a practice which allows alpha males to have sex with multiple partners within a moral, not to mention legal, framework?

I am not talking here of forcing young girls to marry partners chosen for them as has been found in some fundamentalist Mormon sects and in some Muslim countries. This is tantamount to child rape. I am speaking of polygamy with the fully informed consent of all adults involved. While controversial, this could be at least an option for SOME individuals.

One model for the institution of polygamy might come from Indonesia, a progressive Muslim nation where the practice is legal under tight constraints. Most importantly, the first wife must give consent (The need for the first wife’s consent can be withdrawn if it is proved that she is infertile, terminally ill, or “not performing her wifely duties”). Another condition is that it is necessary to get the permission of a religious adviser. Polygamy in Indonesia is controversial with some women’s groups trying to have the practice forbidden. However, some women, such as Dr. Gina Puspita are supportive of the practice, starting ‘Polygamy Clubs’ to educate men and women who may be considering adopting the practice.

And of course all of the arguments in favor of polygamy could also apply to the practice of having multiple husbands or polyandry. This was traditionally practiced in some parts of Tibet where a woman might marry two or more brothers, one of whom would be off on long trading treks for months or years. One could easily imagine powerful women like Hillary Clinton or Carly Fiona having multiple husbands. And there would likely be many men wishing to be added to Sarah Palin’s harem.

What if Tiger Woods’ had married a women who understood that he would likely take on more wives in the future instead of a wife who unfortunately assumed he would be monogamous? How many of Tiger’s mistresses would even today opt into a polygamous marriage? We most likely will never know. What is certain is that the vein of suffering in Tiger’s current situation has not dried up. The Ring has been ripped from his finger, and like Gollum, he is falling into a fiery abyss.